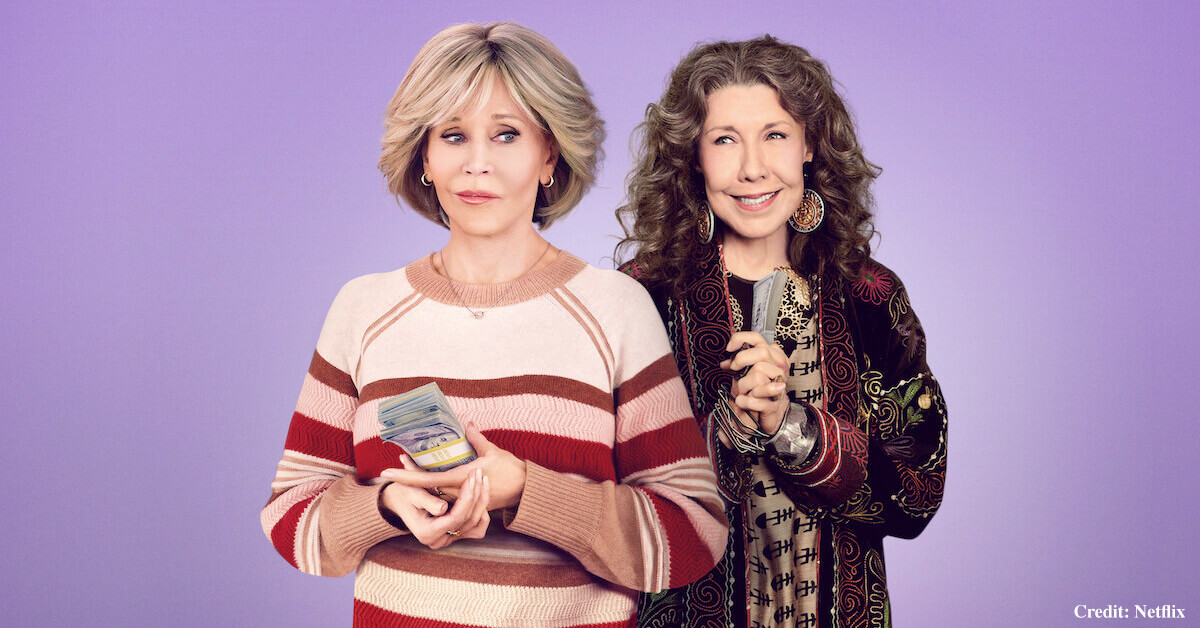 Thank you Grace and Frankie for the laughs and the life lessons about death, dying and grief.

Like millions of people across the globe, I fell in love with the original Netflix series Grace and Frankie. The powerhouse cast including Jane Fonda, Lily Tomlin, Martin Sheen and Sam Waterston is a hilarious series that was such a fun and enjoyable show to watch.

Belly laughs are the BEST feel good medicine and this series provided them with each episode.

Due to the pandemic, this past 7th season was split in two parts, with the series wrapping up after its release in April 2022.

If you’ve not seen Grace and Frankie, here is the premise in a nutshell:

Robert (Martin Sheen) and  Sol (Sam Waterson) are business partners in a law firm who are married to Grace (Jane Fonda) and Frankie (Lily Tomlin).

We quickly find out that it’s not just a business partnership.

Sol and Robert have been having an affair for years and have decided in their “senior” years to come clean with their wives and to also come out of the closet and live the rest of their lives together.

As a result of the late in life turmoil, Grace, an uptight type A executive and hippy dippy Frankie, are left figuring out life together. This mixture of oil and water is what lends to the hilarity in the series.

Through the years, we have grown to love all of the characters and because the main characters (and the actors) are in their 70’s and 80’s, the situations in which they are dealing are not just important and relevant to people of a certain age, but are handled with a mix of comedy, mayhem, heart and determination that can help all of us all as we move in that direction as well.

They covered so many topics in this series including sex, drugs and rock and roll, that it only makes sense that death and dying, and how we choose to deal or not deal with it are also addressed in the final season.

There were so many lessons and takeaways about death, dying and grief from the final few episodes.

I want to share a few of them with you, so if you have not finished watching the final season, stop reading this, watch til the end and come back to this.

I don’t want to spoil it for you.

If you have finished watching or don’t care about spoilers, then let’s begin.

Through a series of antics we find out a well trusted medium predicts Frankies death to come in just three months’ time.

Grace hears the news and the idea is preposterous.

Frankie hears the news and we see her go through the most of the Kubler Ross stages of grief: denial, anger, bargaining, depression and acceptance.

Once she gets to acceptance, we see Frankie have a new gusto for living her life on her terms for as long as she is alive, which includes planning her funeral to take place while she is alive so she can hear all the good things people have to say about her while she is living.

That’s great advice by the way. Say those things NOW to the people you love. That’s when it truly means something.

Moving along now… as we witness Frankie’s acceptance of her death we learn more about Grace’s deep fear of death and dying and how she has spent her entire life coping with or not coping with her grief.

Frankie has chosen to live fully before she dies.

She wants to see it all, do it all and do it fast.

She wants to play, make sure her family is happy and secure, and is even enjoying herself as she plans her own funeral.

Grace on the other hand is so afraid of her friend dying she digs deep into her bag of coping mechanisms and discovers none of them are working.

After experiencing what she first thought was a heart attack she ditches the booze and pills in exchange for comfort food: her mom’s recipe for chicken paprikash.

So desperate to find the family recipe she mends fences with her estranged brother in order to have access to it,,

When he shows up on her doorstep, we learn that Grace and her brother lost their father when they were children.

He apparently went for a swim in the ocean and drowned. Her brother was too young to remember. Grace on the other hand, witnessed it and spent her entire life trying to forget. She lives a life based in fear, fear of the ocean, fear of grief, fear of getting hurt, fear of getting too close to people because they could die.

Grace has lived her entire life with unresolved grief!

And learning this one thing explains everything about how Grace looked at the world and navigated her way through it.

How many people do we know who have gone through their entire lives trying to avoid the pain of grief and loss by excessive eating, drinking or working?

How many people have disconnected, isolated or raged their way through life as a direct or indirect result of grief that has not been worked through in a healthy manner?

Take a look around.

Chances are, these are coping mechanisms because they know no other way.

Maybe it’s their way of dealing or not dealing with trauma, or grief or both.

It might not be our job to fix it for them, but maybe this helps us to understand that many of the unhealthy behaviors people engage in are because they have deeper issues they need to tackle.

And if you are one of these people, the good news is, you can choose another way. You can choose to seek out support, counseling or coaching to help you heal those festering wounds. Making this decision takes courage, and can reap great rewards in truly LIVING your life instead of just surviving.

When we take a look at what unresolved grief has cost Grace in her lifetime, we begin to understand that all of the things she did were to avoid pain instead of fully enjoying and engaging in her one precious life.

Frankie was able to help Grace, unwind, dig deeper, and face life’s toughest disappointments and losses with love, kindness, commitment and support in a lot of crazy and unconventional ways but at the heart of it all Grace knew for sure Frankie had her back. But Grace also knew that to fully engage in her life, she needed to have the courage to face her true fears, and work to resolve them. Grace had to do the heavy lifting.

I’m sure if Grace had learned a healthy way of managing grief, or even had the support she needed early in life, she could have lived in a way that was much more fulfilling physically, mentally, emotionally and spiritually, but then that would not make the series as nearly as fun and enjoyable as it was.

Want to share your story or offer tools to help women Graduate from their grief?

Fill out this podcast guest form. If it’s a good fit, I’ll be in touch with you.